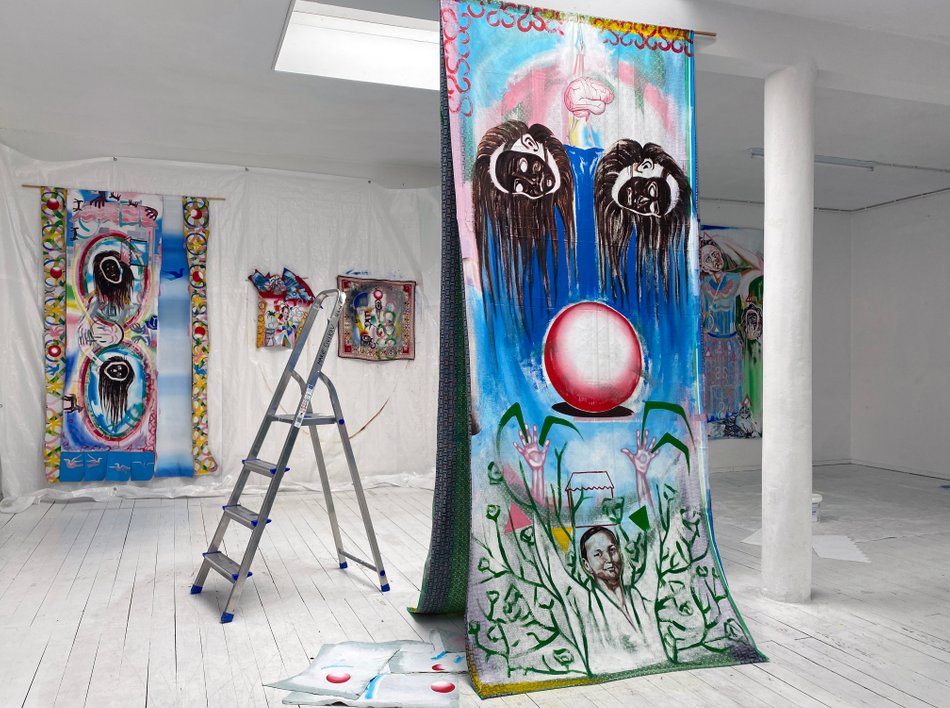 Gradually, in addition to my Bulgarian background, I started delving more deeply into the Indonesian/Dutch East Indies side of the family that I inherited from my mother. In 1946, as a 4-year-old toddler, she arrived with her mother by ship from Java in the Netherlands. Both my Bulgarian and Javanese roots determine my identity, which was also to a large extent shaped by my life and work in the Netherlands.

In a fluid way, the various influences on my DNA seem to blend together in my work as well.

Which messages, from which we can draw conclusions and lessons today, are contained in the smaller and bigger stories written down by my grandmother about her raising in colonized Indonesia in the first half of the 20th century with a Javanese mother and a Western European father?

There is not much mentioned about her mother, which might be partly due to the fact that she died at a relatively young age, when my grandmother was 14. There are, though, a couple of photos of her, including one showing the family mourning around her grave.
My curiosity for her and who she was is great. The awareness that her position within the society in which she lived and most likely also within the family, was inferior to anyone who was less "native" and more European, including her own children, and that this may have played a role in the fact that there is relatively little documented about her, contributes to this. 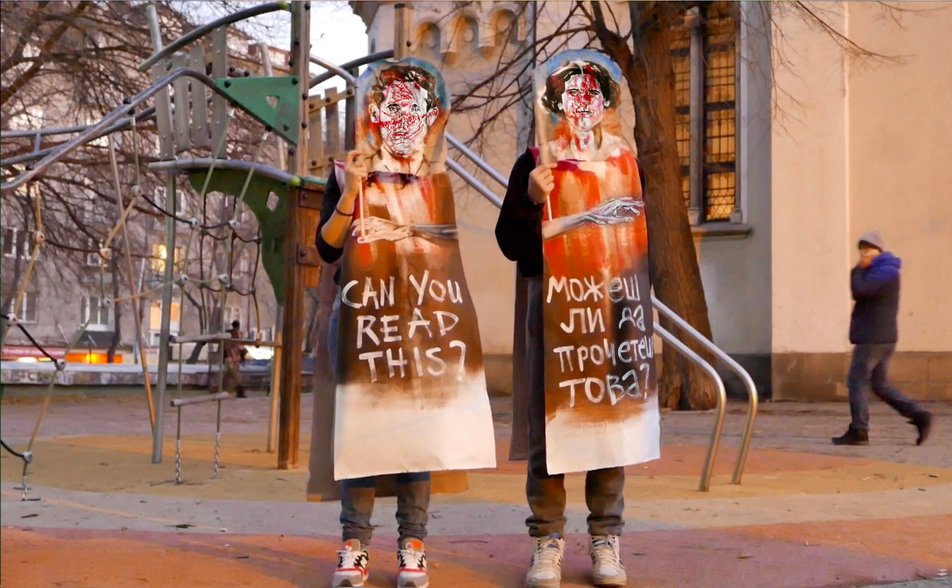 The revolution will not die with us #2, Robotic Thought, collaboration/performance with Voin de Voin, video still teaser December 2017

Exhibition view as part of Æthers project "Becoming the Other" in collaboration with Voin de Voin and Andrew Fremont-Smith during "Soft Power Palace", an initiative of Akademie Schloss Solitude, Stuttgart, 2018

Exhibition view as part of Æthers project "Becoming the Other" in collaboration with Voin de Voin and Andrew Fremont-Smith during "Soft Power Palace", an initiative of Akademie Schloss Solitude, Stuttgart, 2018

The Revolution Will Not Die With Us #3 - You have seen me in your sleep, collaboration with Voin de Voin, 2018

The revolution will not die with us #3, You have seen me in your Sleep, installation and performance in collaboration with Voin de Voin and Andrew Fremont Smith, 2018

The revolution will not die with us #2, Robotic Thought collaboration/performance with Voin de Voin, costumes (wearing our ancestors), 2017

The revolution will not die with us, a cooperation/performance with Voin de Voin, bird suits, location pic, 2017

The revolution will not die with us, a cooperation/performance with Voin de Voin, bird suits, 2017

The revolution will not die with us, performance in collaboration with Voin de Voin, 2017

The revolution will not die with us, performance in collaboration with Voin de Voin, 2017

A subject that's always more or less present in my work is the unknown of death. During my childhood sometimes I had fear dreams about death. These were abstract dreams of dark coloured wires floating towards me through space. They occurred when lying in bed or on the couch with feverish flu. With my eyes open I saw them approaching me. At first they were straight and even but soon the wires were tangled together, became heavier and pressed their suffocating weight on my blanket.

Since a couple of years these knots of wires often are visible in my work. They don't as much symbolize the fear of death, but more the inevitability and mystery death brings with itself. Does anything of our spiritual being remain when we're physically not here anymore? And if so, is it possible for us, people who love each other, to meet somewhere? On the other hand, more concrete subjects concerning nowadays western society catch the same amount of my interest. These two, the physical and the metaphysical, I find interesting to combine. My intention is to convert the personal and private as closely as possible in my work in a visual language that makes outsiders curious and permits them in a world they do not know: identification nor recognition are my goals; it's rather about rapprochement by wonder. 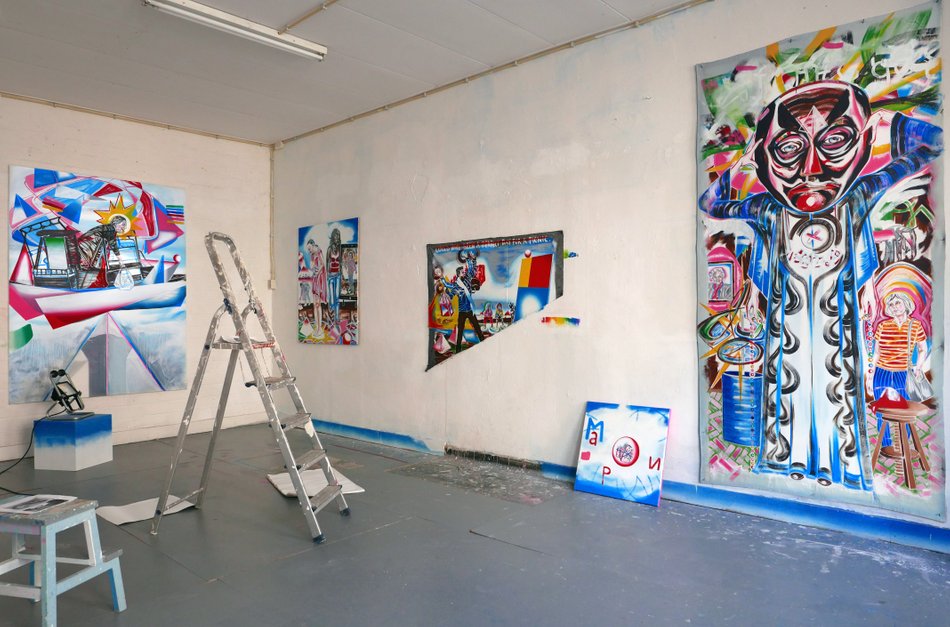 As a child, lying on the couch with feverish flu, I could sometimes dream with my eyes open. These were abstract dreams of wires floating through space. From the couch, from under the blankets and through the floating wires in the distance, I could see my parents, my brother and my sister sitting at the dining table. The wires that came down on me – still nice at the beginning, light in weight but dark in colour, straight and even – had a calming and reassuring quality, but never for long. Soon the wires became heavier and pressed on my blanket, causing slight panic. And what I always tried to avoid at such a time (by thinking “stay calm, stay straight”), inevitably happened: the wires were tangled together and that meant death.

This is one of the associations that came to my mind when looking at (a detail of) my work, which today often shows coloured irregular webs. At this time most of my work is created without a plan, impulsively, often inspired at the moment, the works elaborating on each other.

In the series of paintings I've finished in 2014, symbols that are well known in Western culture transform and are given a new meaning. This way a holy cross turns into an intersection or an unfolded cube; when numbered, it becomes a dice cube.

Once there was an American doctor who, after weighing six patients during their dying process, concluded that 21 grams is the mass of the supposed soul. A baby's heartbeat starts at approximately 21 days and a dice cube has 21 dots (in Dutch we call those "eyes"). Life, so it seems, is a matter of luck.

In Heavy Refraction of Light, not only the light is broken in a crystal that is too heavy to lift; the work itself is made up of broken pieces of linen, consisting of several canvases. At places where I could not stand the colour (I have a love-hate relationship with colours), the canvases are reversed, making visible the intersections of the composite pieces of linen on the back. In this way, there is always the option to take a new path.